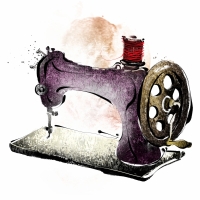 Sewing Should be Fun

Or, connections! I fell in love with Kuspuks over 30 years ago. My affinity for quilting fabrics utilized in a very practical hooded pullover that celebrates Alaska’s beautiful cultures has something to do with this. “Kuspuk” is an English word for the various Alaska native words used to describe this cotton hooded garment. It is similar to a sweatshirt but typically fashioned out of woven quilting cottons. Although, Kuspuks can be made of any kind of fabric. The State of Alaska’s legislature celebrates the cultures of this great state by wearing Kuspuks on Fridays. This sort of celebration has fostered a curiosity in the garment, honor and respect for our indigenous peoples’ choice in clothing. A fair number of our native women sew and sell Kuspuks from their homes as the demand for the garment continues to rise in Alaska.

Kuspuks are worn by men, women, boys and girls. The men wear a shorter non-ruffled version of the garment. Just so you know, I do not pretend to be an expert on the garments. Garments in general evolve to suit the needs of the wearers over time. Like all garments in the history of humanity, they were and are made from materials that are available. Regarding the Kuspuk, the early ones were made out of fabrics brought in by fur traders. The modern day Kuspuk is a culmination of cultures merged. They are made out of printed quilting cottons, cottons that are relished by quilters across the globe, cottons that depict the artwork of someone else… I’ve seen them made out of canvas too, primarily for men. I’ve made them out of polartec for warmth.

It’s important to note that Kuspuks are not regalia and should not be confused with the proprietary nature of regalia. However, if you were to visit Alaska’s northern native villages and/or celebrations you might see beautifully adorned Kuspuks. Parkas and some Kuspuks might be adorned with trims that are proprietary to the individual Alaska Native Clans. Those trims DO belong to the respective cultural group. Most Kuspuks throughout the state, however, are simply trimmed with nondescript ric rac type trims, bias tapes or whatever is readily available. Those of us with access to great fabric shops have access to a great variety of beautiful trims.

I’ve introduced many to garment sewing through the Friday’s Kuspuk pattern. In these classes we address a wide variety of sewing skills: grain of fabric, adjusting patterns to fit, seam allowances, sewing convex curves to concave curves, finishing seams, application of a variety of trim types….. So, the Kuspuk classes at RainTree Quilting are more about garment sewing than a history of Kuspuks. My most interesting classes have been attended by Alaska Native women who have great stories about Kuspuks in their families. Some have described unique pockets, others have shared unique trims. The Kuspuk is kind of like a canvas waiting for the individual’s artistic expression. So, again, at RainTree Quilting our Kuspuk classes are really about garment sewing techniques. A Kuspuk is the culminating project. Everyone is beautifully unique. And, they are beautiful because of cultures shared.